33 projects were shortlisted for the Don’t Move Improve award; we recently attended the Winners Breakfast Talk, where the 1st, 2nd and 3rd place contestants presented their work.  Here’s our second ‘Absolute’ favourite…

Short Description- Side return extension on a Victorian semi-detached house for a family with 3 young boys.

Our Winner- The brief was to create an extension that made better use of the garden, creating a clearer visual link between the inside and outside of the house. Taking inspiration from the Modernist architect Adolf Loos, the extension was designed as a pavilion, with no partitions. Instead of playing on this minimalist style, the walls were painted in rich, vibrant colours to add a playfulness and importance to the extension. The different spaces were defined by changes in ceiling height and floor surface, along with exposed structural concrete columns.

The street facade of the house is very ornate, creating a very distinct difference between the front and the back; the architects found this particularly interesting and wanted to create the idea of a house that “looks both ways” with a front and back of equal importance and interest. Clay tile, resembling the appearance of brickwork, was used at the back to match the facade at the front, instead of matching the yellow London Stock brick traditionally used at the back. The orientation of the tile was changed throughout the facade. In the early stages of the design, the project was explained to the children as a fox in the garden, and the architects ran with this idea, turning the facade more and more into the shape of a fox. 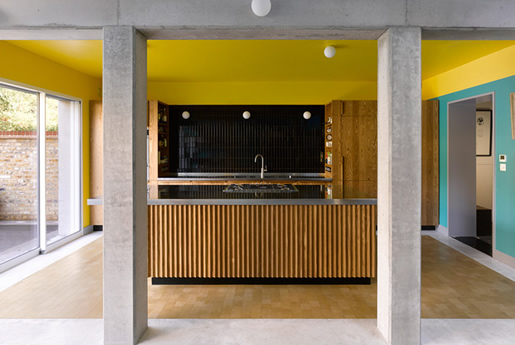 Our favourite part of the project- When considering how to enhance the relationship between the inside and outside, the architects took many different internal viewpoints into consideration. For example, the high level circular window, which from the outside appears to be the fox’s eye, is positioned much too high up to be of use to anyone using the dining space below. However, it directly aligns with the new arched window at the back of the space, connecting the existing front rooms right through to the garden at the back.

At Absolute Project Management we have helped our clients with interior styling, using colours to effectively ‘zone’ areas of their house.  We work with them to achieve a beautiful finish which will last and push them to go for colours which suit the space and can uplift the spirits.

See this redecoration project where we used 3 colours to zone the dining, living and kitchen areas.  We also added a bright yellow wall to the balcony outside- giving the balcony a sunny feel.

For help/ advice with your project; get in touch