You’d like your top floor room redesigned into a light lounge area where you can socialise and watch TV. You’d also like to retain your keyboard in the space and an area where you can practice yoga- you’ve provided us with details of your existing furnishings for this.

You like pale colours and particularly like seaside theme, though as we mentioned this theme can be used as inspiration but adapted to suit a London townhouse/ the rest of the interiors throughout the house.

We began by selecting a large comfortable and welcoming sofa and chaise longue. We wanted the main sofa to face the TV, as this is how you will most regularly use the space; the chaise longue faces the attractive doors to the balcony with a view of the trees beyond. We’ve placed the main part of the lounge in the largest part of the room- making the most of the light from the doors and the depth next to the stairs. The slightly smaller area with reduced ceiling height will provide space for your keyboard and yoga mat as shown. We’ve added a lovely decorative mirror on the wall to add interest and reflect green from the tree by the balcony back into the space.

To provide separation from the general walkway between the stairs and balcony- we’ve suggested a beautiful sideboard in mango wood. The doors have lovely detailing which draws the eye as you come up the stairs.

To define the main seating area and make it comfortable, particularly in winter months, we’ve added a large rug. A collection of 3 hexagonal side tables create a coffee table or you can move them around or use outside in the summer months- giving you plenty of flexibility.

We’ve suggested hanging your existing TV on the wall on a movable bracket- this will allow you to angle the TV comfortably for all seating options and it’s especially useful to avoid glare from the numerous windows in this space. Underneath the TV we’ve added a mango wood console table to house all your TV paraphernalia. 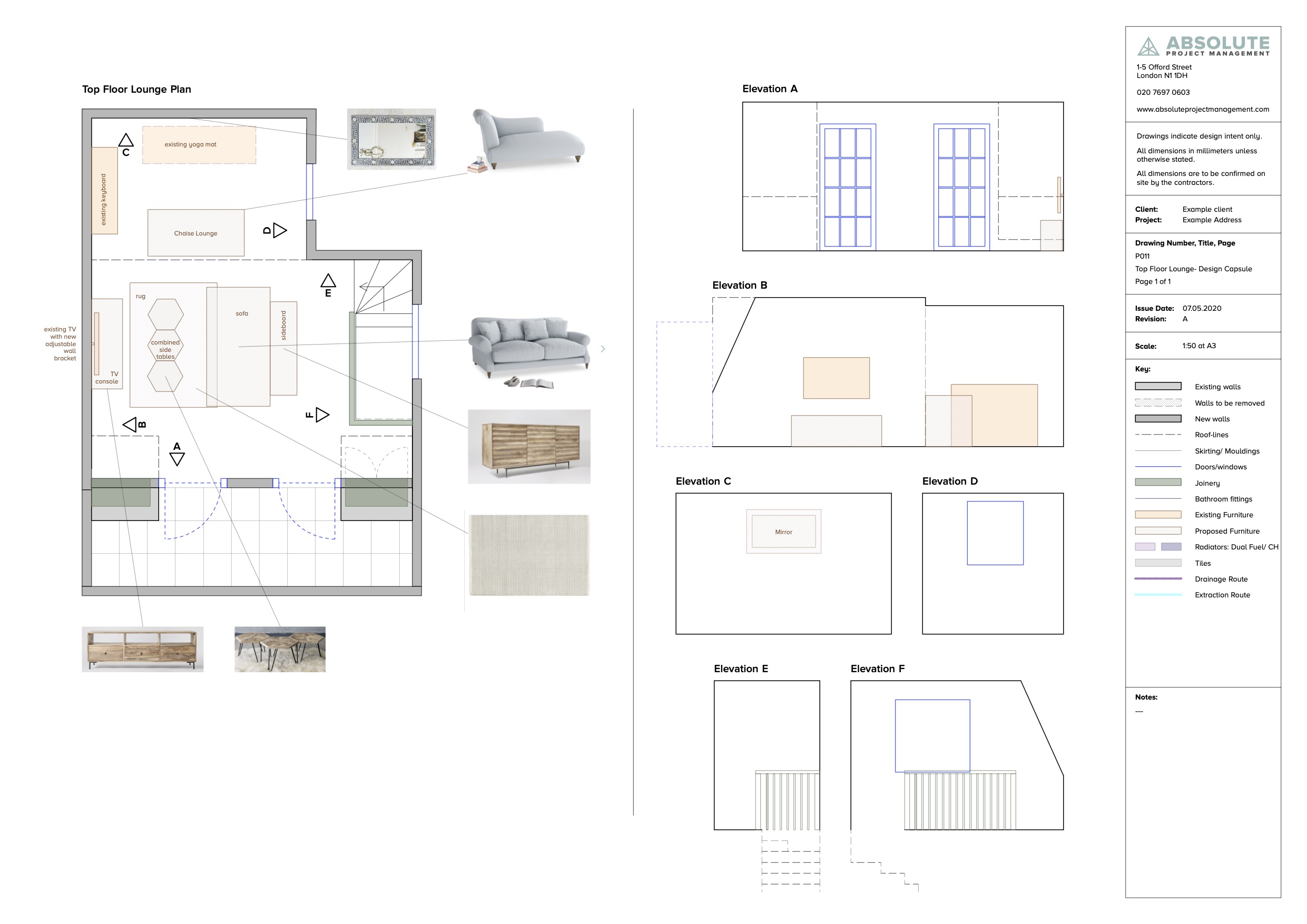 We’ve suggested retaining the beautiful floorboards and treating them with a light stain or oil to acheive the pale, coastal theme colours which you love.

For the walls, we think Farrow and Ball Skylight will work beautifully on the main wall (elevation B). This colour is slightly greyer than typical coastal themes and suits the space. On many days it will reflect the sky seen from the other sides of the room. For the other walls we suggest F&B Strong White as this is neutral and can be carried down to the open hallway below- we suggest Modern Emulsion for the walls though you could go for a Dulux Diamond colour match. We recommend eggshell white for the woodwork and matt white for the ceilings.

For all finishes – we strongly recommend completing sample patches ahead of making a final decision and engaging a professional to complete the work. 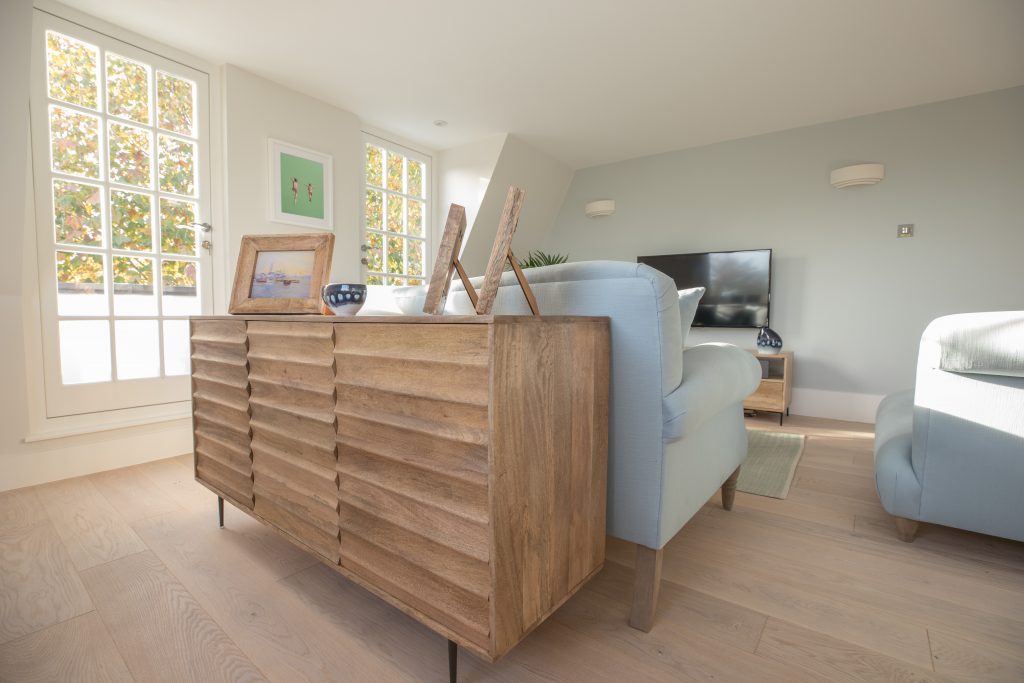 You’ve opted to add to your Design Capsule – choosing our Extended Services in recommending additional accessories, and a lighting & electrics design.

To increase flexibility in the space especially if you’re entertaining multiple people or wanting to move furnishings to the balcony- we’ve suggested a couple of pouffes which can be easily moved or used as foot rests. We’ve suggested two different options to add interest and style. We’ve also suggested a good sized door stop which can be used to hold the balcony doors open, allowing good airflow in the summer.

To add interest and pull the elements of the space together, we’ve suggested a beautiful large vase and modern pottery with white and blue costal themes. We’ve also suggested a collection of different sized mango wood frames which can sit on top of the sideboard. A tall lamp adds mood lighting; we’ve chosen this beautiful white feather fitting to emulate the feeling of being in the sky- it is almost cloud-like and will look amazing against the Skylight wall.

To add comfort and colour- we’ve suggested some cushions with warm tones and low-maintenance indoor plants. You could use wicker baskets as pots or as storage baskets for blankets/ balcony cushions. We’ve also added suggested locations for adding artwork to the elevations- including advising whether each piece should be portrait/ landscape and approx. size including frame. 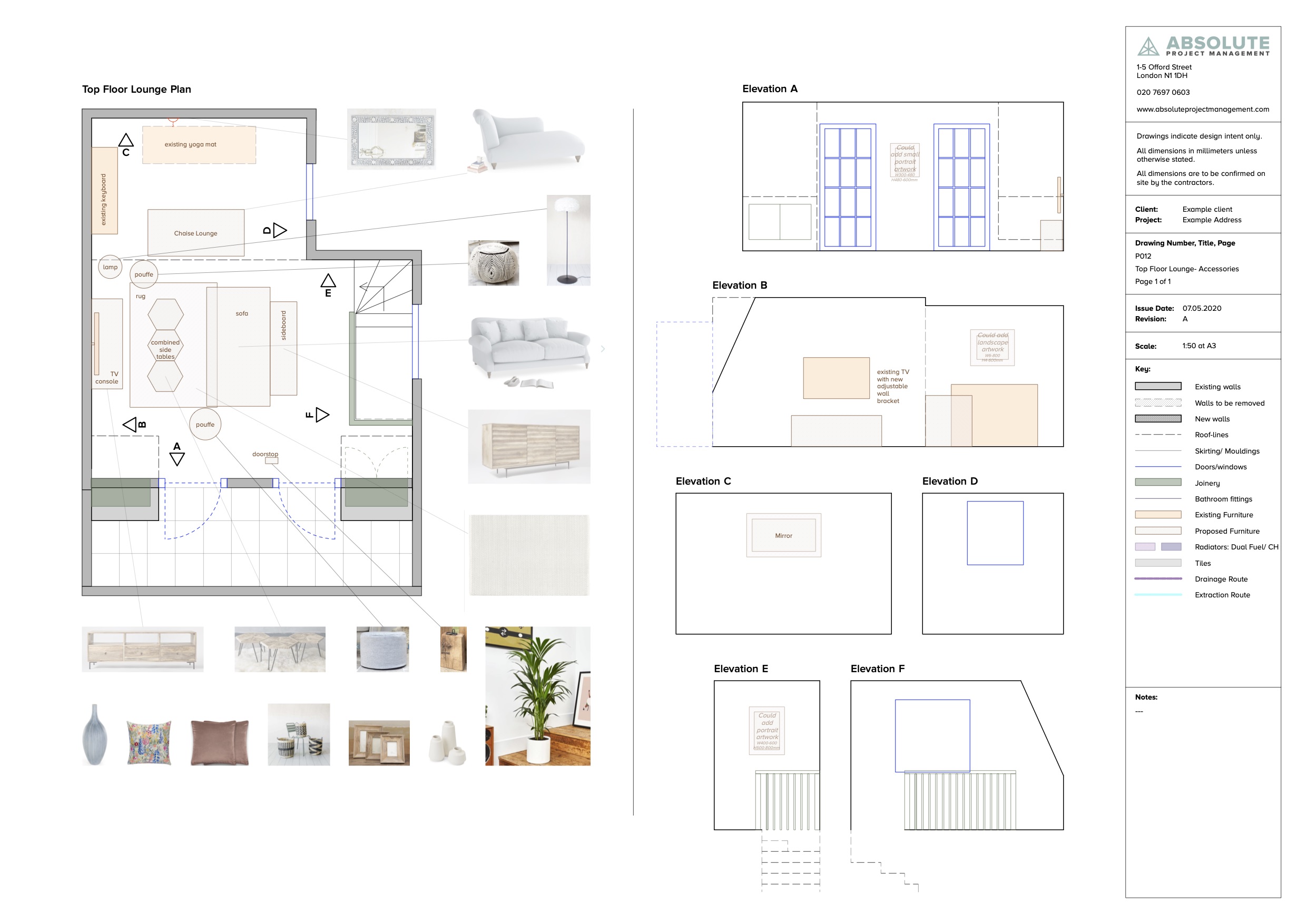 We’ve retained the existing downlights in the smaller section but suggest replacing the fittings with dimmable directional LEDs- this will give you greater control over the angle and strength of the light- particularly useful in a mixed use space. In the main area we’ve added two downlights in front of the doors but avoided adding a pendant as the ceilings are low. Instead we’ve added wall lights which will provide soft, attractive lighting. We suggest simple plaster fittings which will look like part of the wall and can frame the window (with the amazing view) and the TV area. These are independently controlled so you can create scenes and avoid glare from the stair side wall lights when watching TV.

We retained the existing position of the light switch but changed to a 3 gang dimmer for the room and a single on/off gang for the hallway lights below.

Throughout, we’ve added additional sockets and suggested USB sockets for key areas where you will plug in devices or charge your handheld electricals. The intercom location has also been retained as we think this works well.

As discussed- you may require a fire-safety misting system on this floor- a specialist will need to confirm the best locations, so for now we’ve added a provisional appliance point in the eaves joinery for this.

For radiators- we’ve suggested column rads which will match the rest of the house throughout and can produce a lot of heat without taking up much space. However, if you prefer to keep the top floor more modern, you could use larger flat panel rads instead. The required BTU for the whole space is 8956 which the two rads shown in the plan achieve. If you decide to replace the rads and plumbing throughout, you could have the top floor as a separate zone with its own thermostat and controls. We’ve provisionally added a thermostat to the plan for this. 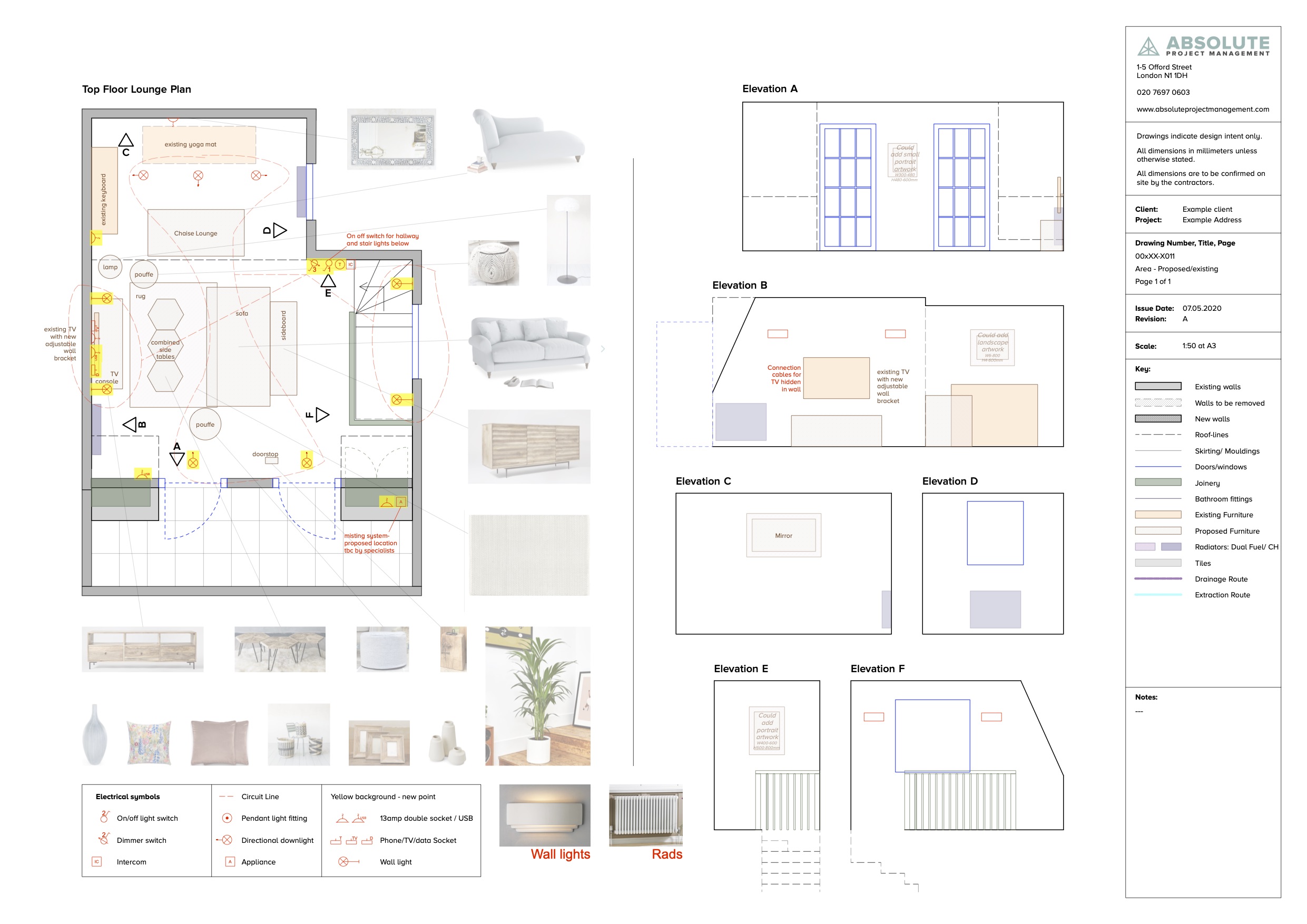 Ready to get started making these changes? Read our advice on managing a renovation – and some inspiration!

If you would like our help planning and managing your renovation, or are interested in any of the additional extended design services, get in touch.

For help with your property…

Call or email now to discuss.